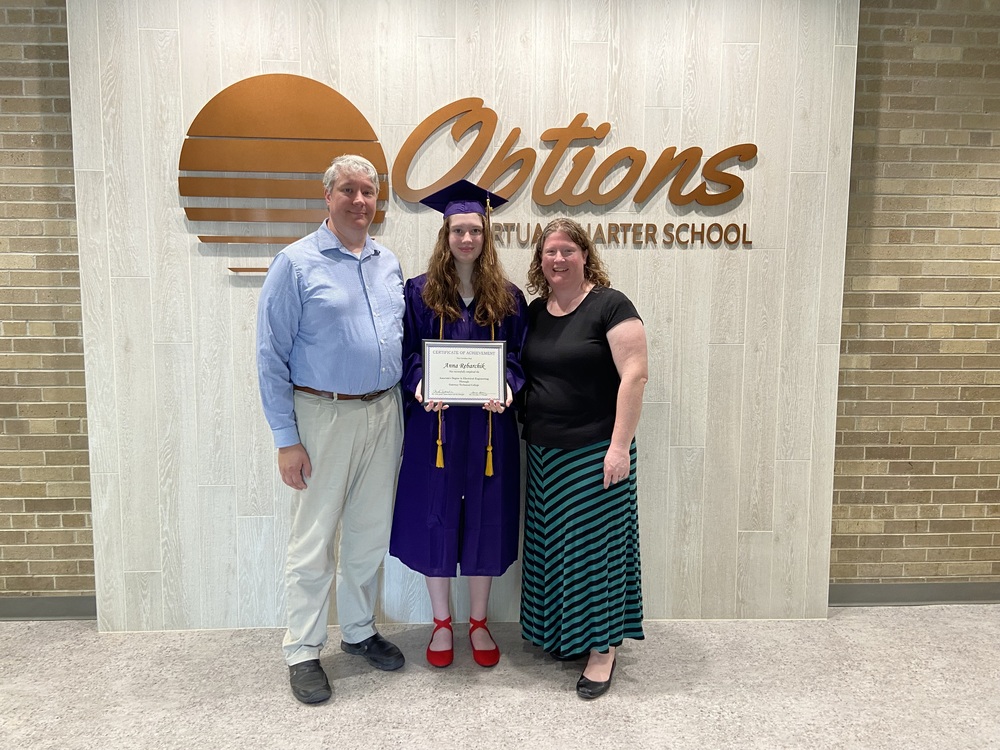 And yet, thanks to a commitment from the Elkhorn Area School District, Anna Rebarchik got to call herself a graduate of Gateway Technical College before she walked for Elkhorn Options Virtual Charter School June 1.

With high schools participating in the Start College Now program through the Wisconsin Department of Education, it’s not unusual for high school seniors to graduate with a number of college credits taken care of.

However, many districts will limit what students can take. The cost is covered by the state and districts, which can add up to thousands of dollars per high school year.

"This aligns with what our district vision is,” said Chris Trottier, director of School to Work opportunities at Elkhorn. He works collaboratively with Elkhorn’s two charter schools – the Career and College Academy and the Options Virtual Charter School. The latter is the school Rebarchik has attended since the sixth grade.

“Anna is just one of those shining stars that took it to the next level,” Trottier said.

According to Anna’s father, David, his daughter didn’t set out with any grand plans. She started with some school at home through Options during her middle school years, and decided to pursue more classes after school went virtual in 2020 due to the COVID-19 pandemic.

"So as she looked at plans for her junior year, and not wanting to deal with switching back and forth between in person and virtual as the high school might have to do, she looked at other possibilities,” David said.

The family had heard about doing classes through Gateway Technical College, and electrical engineering won out because the program would also check off the boxes for high school at the same time.

“That would mean she could complete it at the same time as high school,” David explained. “And that path felt right.”

It was one of the few pleasant side effects of the pandemic.

“So even when the world was in chaos, good things can happen as you seek for them and are willing to adjust plans as needed and take a chance on new opportunities,” David said.

The plan worked because of the cooperation between GTC and Options. According to high school Principal Sara Stone, Anna’s math skills were evident immediately.

“She was doing geometry in sixth grade,” Stone said. “It’s always been the philosophy of that charter school to meet kids where they are at and take them as far as they want to go with their education.

In Anna’s case, that was pretty far.

Part of the efforts from Elkhorn is to break down the traditional path earning everything from credentials to college credits. Anna took College Level Examination Program or CLEP exams, sponsored by the college board. It enabled her to test out of several different high school classes for math.

“We align college credits with graduation requirements,” Trottier said. “We don’t hold to that traditional framework that you have to take these classes.”

All of Anna’s GTC classes were online, which her father said was an advantage as the two schools worked with one another and with Anna. He also credited her starting school as a Montessori student.

“Her Montessori beginning had really helped her be ready for that structure, although that was still a struggle since procrastination is so easy to do,” David said. “Her determination to complete the classes won out.”

“She is a driven individual,” she said, adding that to do what Anna did took drive, organization initiative and motivation.

“Those are all qualities that make a student successful,” Stone said.

And while Anna was working toward completing both goals, there turned out to be a surprise in the making.

Most high school graduations take place the first week of June. That was the case with Elkhorn, which held commencement ceremonies for the main high school June 2.

The day before, though, Anna received her diploma from the Options school, along with nine other students. But by then, she already had her GTC electrical engineering associate’s degree in hand.

“As she got closer to the end, we saw the dates for graduation,” David said. “Gateway’s graduation was May 17 and Options was June 1. She thought it was great that she would graduate from college before high school.”

Anna said that she set herself a goal, and then accomplished it.

“I know that at any point since I could have decided to do something different,” she said. “But even when things got hard or I was less motivated, there wasn’t enough reason to change my goal. I was still able to do it, and I still wanted to do it, so I kept going. And I did it.”

Trottier said it was the first time in Elkhorn’s history that a student had accomplished that.

“I think it’s a real celebration, first and foremost, of Anna,” said Trottier, stressing her commitment to the course load. “Second, it’s an amazing achievement for the Options school and the staff. Finally, it’s a tribute to the district to make this kind of investment.”

And as more and more students get chances to take courses like this, Trottier said he expects the traditional brick and mortar walls of high school and college to merge even closer together.

“It’s not only significant, it’s probably essential,” Trottier said. “As we look at employer needs and the needs for schools to feed the employee pipeline … this not only prepares students for whatever their postsecondary goals are, but their preparedness.”

This story originally appeared in the Elkhorn Independent.